Hive Today is a weekly newsletter for the decentralized Hive network. Hive is a blockchain-based social app platform. This newsletter provides a summary of Hive apps, games, witnesses, and proposals news. Thank you for reading and sharing.

Over the past two weeks, Hive holders watched excitedly as Hive prices soared to new heights, Hive coins continued to flee exchanges, and Hive's total supply shrinks dramatically. Take a look at the charts below. This Week in Hive Witnesses and DHF Proposals

Hive witnesses keep the blockchain running. The Decentralized Hive Fund (DHF) allows the Hive community to submit proposals and receive funding. This is a new section added to HiveToday. From now on, we will keep a close on new proposals and funding changes, as well as witness movements and witness updates.

@brianoflondon's Value4Value app proposal was also approved for funding. This project connects the Bitcoin Lightning Network to Hive, enabling podcast apps to send tips to Hive content creators. Podcasting 2.0 calls the tips "boosts," and "boostagrams" are short messages attached to those tips. I tried this out myself and confirmed that it works. First, I sent some sats to a wallet embedded in my podcasting app (Fountain), then I found one of my favorite Hive content creators in the app. Then I sent a boost + boostagram. The boost showed up as a Hive transfer from @v4vapp, and my boostagram message showed up in the transfer memo.

Recently the @clicktrackprofit team (@jongolson and @blainjones) set up a Hive witness. This team is behind several other projects, including CTPTalk.io, CTP Hive-Engine token, TheHiveGuide, HivePay, INDEX token. Consider throwing one of your extra witness votes their way because @clicktrackprofit witness is close to entering the top 100.

The @pizza.witness team (I am a part of) reached Active Rank 71 on the witness chart. Our goal is to enter the top 50, and we have plans to expand our hosted Hive infrastructure after reaching that milestone.

Hive powers a growing number of decentralized apps (dApps). Since they all run on the same chain, one Hive account can access every app. Here's a quick summary of the Hive app landscape.

This week the @DBuzz (micro-blogging Hive dApp) team deployed some improvements to the app handling for special characters in hashtags and usernames.

Ecency and HiveSearcher Improvements Rolled Out

In the past few weeks, the Ecency team has been busy. The desktop app saw an upgrade and a new feature called double-click quick vote. HiveSearcher account indexing was improved to provide better results for old and new accounts. And randomized profile avatars called Bottts were added to Ecency, such that new users who haven't set their profile photo will be assigned a unique placeholder image.

This week the @engrave team shared an update on HiveProjects. After listing four new projects, the total count of Hive projects has grown to 135. This catalog is a great resource to discover new tools and apps in the Hive ecosystem. The four added projects are GiftGiver (Hive faucet and HP delegation tool), dCrops (farm simulator game), Hive Reblogger (automatic reblog tool), and Terrive (photo sharing dapp).

This week the Hive.Vote app added a new option for voting on comments. This can be used for upvoting/downvoting content on Hive underneath top-level posts.

Last week, the @Peakd team shared an update on what's in the works for their popular Hive frontend. The two-person team is working on a significant UI/UX re-design to make the site more intuitive for new users. The team is also looking to bring on a new developer and requesting help from the community to find a good match.

This week some illegal content was hosted on 3Speak. The team jumped into action to remove it from their front end and defend their position. A conversation started after the incident asks the community for feedback on how community policing should work for decentralized media.

Exode Sells Out of Booster Packs

Exode, the space-themed NFT game, has sold out of booster backs on the primary store. However, collectors can purchase packs on secondary markets (P2P) and an upcoming WAX offering (with higher prices).

MuTerra, the NFT card game, has launched season 4 of their in-Discord game. The discord games are a hold-over until the full-featured December game launch.

Splinterlands continues to show explosive growth. They have seen days with over 10,000 new players buying Spellbooks (which come with a Hive account). In addition, the daily battle count on September 10th surpassed 6 million! 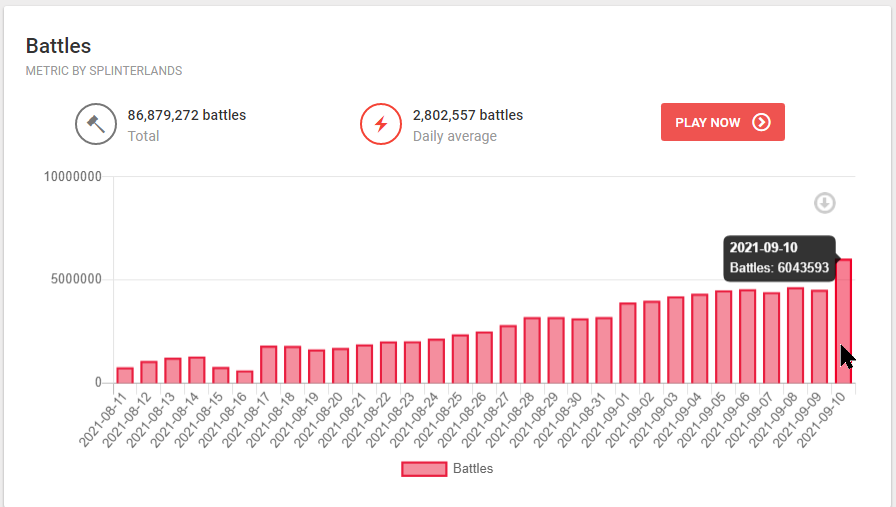 The Splinterlands team also announced a new set of 21 rewards cards. These cards are given out to players for completing daily quests and as season-end loot. Also, four new abilities are added: Amplify, Forcefield, Camouflage, Deathblow.

Thank you for reading. This is edition #41 of this Hive news digest. Your support and feedback are much appreciated. Please consider a follow, reblog, comment, or upvote.

Hive Today is published on Saturdays. The goal is to provide a curated news digest for the Hive community and educate outsiders about all the great things happening in the Hive ecosystem. If specific stories or events are missing here, please leave a comment.

This blog is produced by the @Hive.Pizza team (@hivetrending and @thebeardflex). PIZZA Crew is a Hive-powered social group empowering content creators, gamers, and YOU. We host game servers, a DLUX node, a Hive-Engine node, and a Hive witness node! So please help us out and give your vote of approval for our witness (@pizza.witness). Here's a convenient way to vote using Hive Keychain or HiveSigner: https://vote.hive.uno/@pizza.witness. Thanks for your support!